When most people think of the beat generation and its writers, poets, and characters, the names Kerouac, Ginsberg, Burroughs (all though he was pre and post beats), Gregory Corso, Lucien Carr, Lawrence Ferlinghetti, LeRoi Jones and of course Neal Cassady, come to mind. There were many other men, of course, whose names are not here, pounding out new forms of poetry, but what about the women? Sometimes it seems as if there are literary periods when women are completely absent from a scene, as if they were only there as caricatures, the girlfriends or the wives, but never the writers. But of course, there were women beat writers. As often happens, many of them have gone to the back shelf of history, but just because you do not become iconic it doesn’t mean you aren’t important or that you and your work does not still exist. Here are a few I like. Good poets. 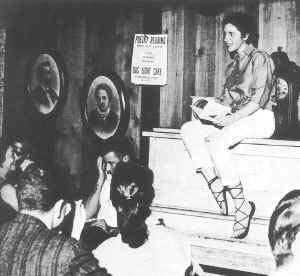 These eyes are amber, they
have no pupils, they are filled
w/a blue light (fire).

They are the eyes of gods
the eyes of insects, straying
godmen of the galaxy, metallic
wings.

Those eyes were green
are still, sea green, or green
their light
less defined. These sea-green
eyes spin dreams on the
palpable air. They are not yrs
or mine. It is as if the dead
saw thru our eyes, others for a moment
borrowed these windows, gazing.

We keep still. It is as if these windows

filled for a minute w/a different

Not blue, not amber. But the curtain drawn

over our daily gaze is drawn aside.

Who are you, really. I have seen it

gaze of power. We “charge”

the other with it / the leap

w/ out sound we live in. Where

are we, really, climbing

the sides of buildings to peer in 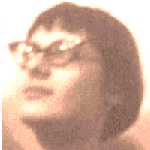 And use the mind for border 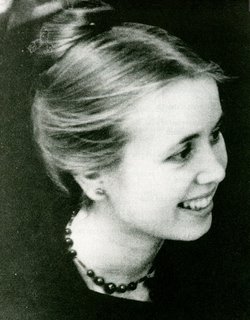 Elise
got on the Greyhound bus.
Having sabotaged
a few clocks
in the city–
she left me the rest,
and a destiny
of endless chop suey
a beat-up copy of The Idiot
She didn’t own much.
When the electrical doors closed
and the air conditioning began,
the black leather roads
took her.

Her friends
celebrate her departure
with beer and a fist fight.

Her parents
in their impenetrable living room
have drawn the blinds.

Love never held my hand
like those summertime couples
palm to palm, the perfectly
interlaced fingers
the pressures
Love never flung himself
around my shoulder, or
measured my waist
love was a grandmaster though,
and he laughed when he came on
like gangbusters, who
could refuse him, ah.
I knuckled under, no regrets
but I’ve always wondered

Braid in with surprises

Each new discovery as

Slow and quiet as a

And if your interested in some bedside table reading: Woman of the Beat Generation.